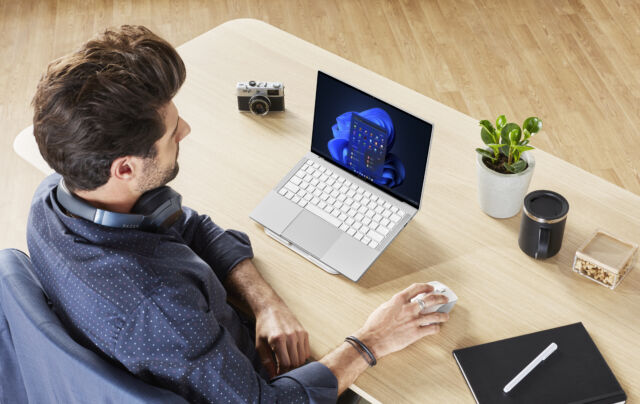 Razer’s roots are in PC gaming, but the Razer Book is the three-headed snake’s attempt at a more mainstream, portable PC. The clamshell’s silver aluminum unibody chassis starts at just 2.9 pounds and 0.6 inches of thickness, making it competitive with ultraportables like Dell’s XPS 13.

Packed with an RTX 30-series mobile graphics card, the Blade 15 Advanced Model is obviously the gaming machine of the two, but compared to the majority of gaming laptops, its design is pretty trim and subdued. The laptop weighs just 4.4 pounds and is 0.67-inches thick.

Razer noted today that owners of older Razer laptops will be able to upgrade to Windows 11 “soon,” and relevant Razer drivers will integrate automatically. You can find Razer’s full list of supported PCs here.

Razer also said that its software (like Synapse) and peripherals are all “fully compatible with Windows 11.”

New Yubico security keys let you use fingerprints instead of passwords